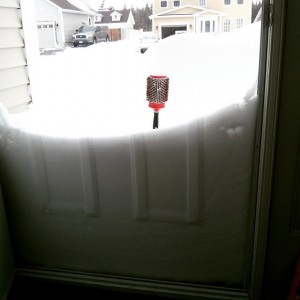 So few updates, yet so much to say if I could just find the time… Ah well, no point dwelling on what has or hasn’t happened.

Monday was the Mid-March Holiday (aka St. Patrick’s Day), but it was also a day where a huge snowstorm hit many parts of the province.

Some of the folks online were insisting that Monday’s storm was Sheila’s Brush. Some voices online felt otherwise. I didn’t really care what it was called, beyond “OMG 30+ cm of snow?!”

We’ve had a pretty good winter and while there has been a few snow storms that have shut down the greater St. John’s area, we haven’t had a lot of repetitive snow where we get multiple storms in a short period of time. Although that may change this week.

This weekend was also Missy Moo’s birthday celebrations since we had to postpone her original party from two weeks ago (I can’t believe she’s two already!). When your house is hit with a nasty stomach bug, it’s best not to share it with anyone. So we put our house under quarantine and luckily it didn’t last too long. 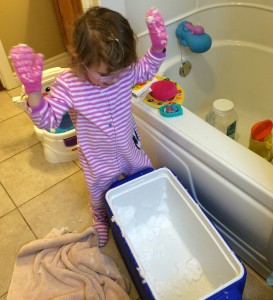 We discovered yesterday morning that a cooler was left outside and had a nice amount of snow in it. I braved the nasty weather and decided to rescue it. Little Miss was watching me the whole time and was pretty excited about the snow.

Since the weather wasn’t going to improve enough for us to go outside, I had an idea – why not bring the snow to us? 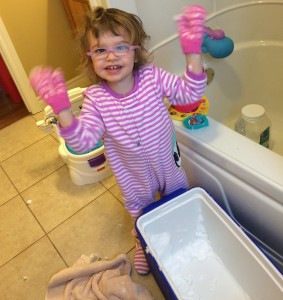 I marched into our main bathroom, with little miss close behind my heels. She figured out quickly that there was snow inside the house and she wanted a piece of the action.

Being able to let her freely play made the mess worth it. And having her say “I love snow!” was enough to convince me that we’ll do this again.