I attended Medical Grand Rounds that day and because I was still very new, the dean gave me a quick intro to everyone who was there… and with a room full of physicians, I was the only one dress up. Ha! I’ve since been dubbed Wonder Woman and have played that up a bit by telling faculty and staff that “when media call, Virginia can help.”

The image to the right was included in an e-newsletter I’ve started called Medi-zine. The write up with this photo was encouraging faculty and staff to contact me if they’re interested in receiving media relations training and support (which I facilitate for medicine).

Now I have a mini-me to live on my desk and help portray that super hero confidence I try to bring when discussing how I can be there for anyone in the faculty who needs help.

On to other things… 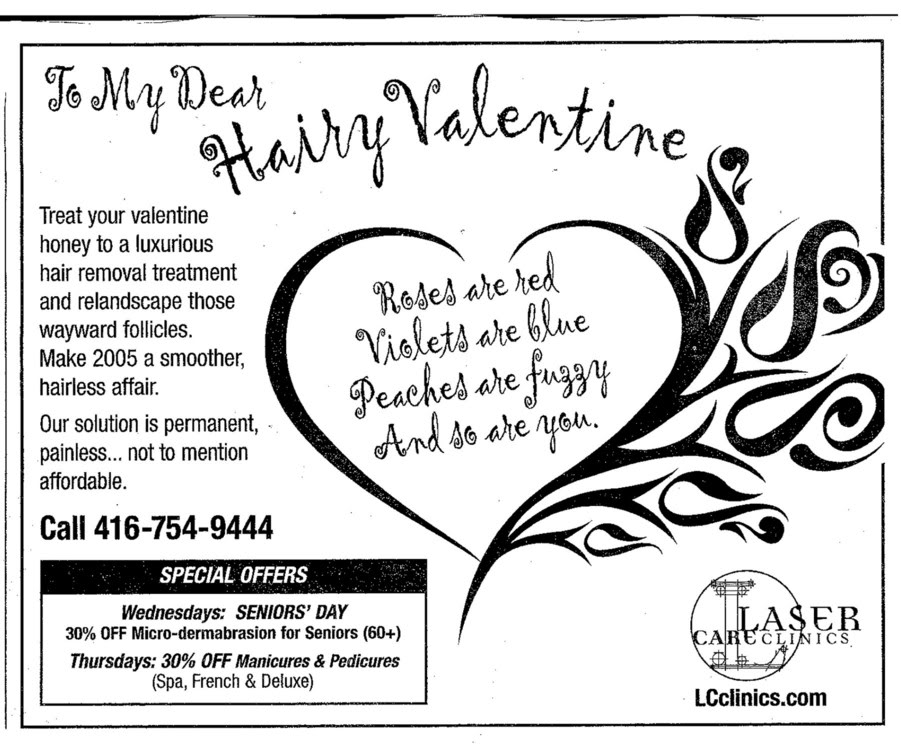 “But Virginia, what the deal with this image?” you ask?! Well it was an ad I found in Toronto Metro, a commuter magazine back when I was at Centennial College in Toronto in 2005. I can’t help but share this on Valentine’s Day when so many people get caught up in the consumerism of this occasion. Yes I enjoy being spoiled by my awesome husband, but it doesn’t have to be on some random day in February that was declared the annual day of love.

I mean really, couldn’t we do this during a time of year that’s warmer? Or is the idea that we’re suppose to feel warm and fuzzy during one of the coldest and weather crappiest months?

If today is a day that really makes you go “Bah humbug” or some other phrase that involves some colourful four-letter words, then I recommend you pop over to Someecards… because they have some pretty awesome Valentine’s (or perhaps more anit-Valentine’s) ecards that will likely make you chuckle.