With a recent absence of posts, I have a very good reason why… Matt and I have moved to St. John’s, Newfoundland & Labrador!

It’s been an insane couple of months, but here’s a quick overview:

So needless to say the past month+ has been a blur. I’ll try to write more about some of the above mentioned events, but it could take a while.

Being back in St. John’s has been amazing. We’re finding a good rhythm here and are settling in nicely. We even bought a new car! More details on that later… 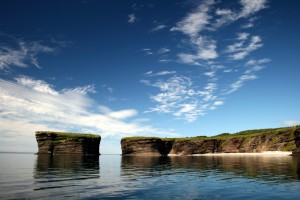 So that’s it for now. Still alive and doing very, very well. :) And just to tease you a little, enjoy this photo taken from my uncle’s yacht back in July 2007. It was a beautiful day and we sailed around parts of Bell Island, NL.