I feel like things have gotten worse now with the advances of technology. Often times, both parents will now have a smartphone and it’s easy for one to say, “Hey, take a photo” or they take the initiative and snap a photo of their child/children which may also include a mom or dad in the photo. Me with my parents and brother

When we’re out and about with Missy Moo, I rarely take a camera now because our phones can take excellent photos. But how often do you pass your phone to a total stranger and ask them to take a photo? For some people, using a cell phone to take photos can be intimidating if they’re not used to snapping away with a smartphone. And even if it does take good photos, there’s the chance of camera shake or some other glitch because the camera’s settings are not always as foolproof as a point-n-shoot camera.

There is also the challenge of dealing with family members who do not want their photo taken. I get that. I’m still losing baby weight and don’t always feel like my best angle is being shown in a photo, but I’m trying to follow the idea of The Mom stays in the picture as expressed so well by Allison Tate. I want Missy Moo to enjoy seeing photos of the three of us together from days long before she can remember. 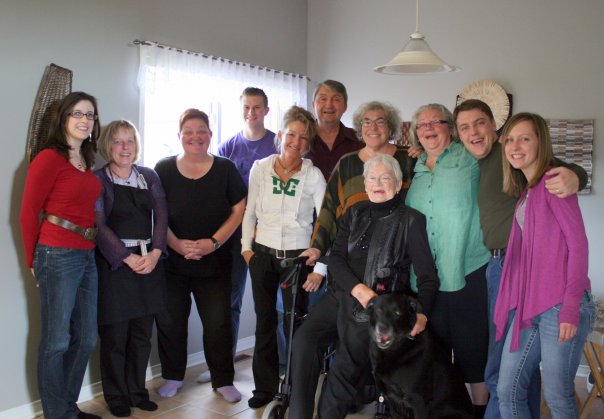 I’ve also been stubborn over the years when it comes to taking family photos and both my own family and my husband’s family can vouch for that. I think it was for Thanksgiving 2009 that I insisted that my husband’s family have a group photo taken because it was the first time in quite a while that his paternal grandmother and his aunts were at his parents’ house together. I had preplanned the photo and brought my tripod. It’s a great photo and the only one we have as a group with Grandma Middleton (who sadly passed away in May 2011). I’m really, really glad I managed to get that photo because it’s one we can always cherish.

With my mom’s side of the family, we’ve started a tradition where when we can get all of the grandchildren and great-grandchildren together (of the six grandchildren, only two live in the St. John’s area), we have a photo taken with my grandparents. We’ve been able to coordinate it every few years at Christmas and I’m really glad we do. That’s something that my paternal grandmother insisted on doing with her nine grandchildren when we were growing up. It always happened on Christmas Eve and I’ll confess that us kids didn’t enjoy it at all, but Grandma loved it and she was so proud of us all. I’m grateful that we have those photos now as she passed away almost 15 years ago.

I don’t mean to sound so negative, I’m just reflecting on the importance of capturing those special moments.

So the next time you’re taking a photo with your family, try to make sure you get all of you in it or at least try to get as many as possible. You’ll thank yourself later.