Matt and I decided to stop into Yellowbelly Brewery before heading to tonight’s St. John’s IceCaps game. 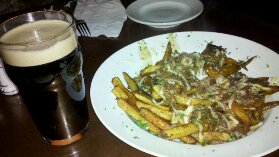 We both ordered a pint of the St. John’s stout and split an order of their short-rib poutine.

So good! Highly recommend both!

UPDATE: After our tasty visit to Yellowbelly, we headed on to Mile One for tonight’s St. John’s IceCaps game against the Worcester Sharks. Unfortunately we lost 4-2, but it was a great game. A lot of fights and clearly some unfinished business from last night’s game, so it was entertaining to say the least!

And as always, our lovable mascot, Buddy the Puffin was strutting his stuff and had some attitude to display. Here’s a photo when he was with us in the visitor end telling the Sharks’ goalie, Sateri how he really felt about him and their team. Buddy the Puffin showing some attitude