Home » Family » My Camera May Have a Cold… or Worse…

My Camera May Have a Cold… or Worse…

I really enjoy taking photos. Since receiving my Canon SLR Rebel XTi last year for my birthday (my very awesome husband surprised me with it just before we left for a long weekend in Montreal to visit my cousin Megan), I’ve been very pleased with the unique shots I’ve been able to capture.

I’m a little frustrated right now because my camera seems to be glitchy and is corrupting files left, right and centre. I did contact Downtown Camera 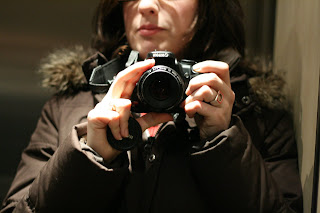 and chatted with someone about the situation. It was suggested that I reinstall the latest firmware upgrade. It seemed to improve things, but I’m a little weary because the corrupted files are still happening, but not as frequently.

There’s a bit of a dead-lock situation as such right now too. If I have the camera sent away to be examined by Canon, I won’t get it back in time for the cruise we’re going on during the first week of March (long-time friends Jason and Heidi are getting married while we’re in Grand Cayman!!). But I have concerns that it will be hard to detect when corruptions occurs (and losing some fantastic photos really bugs me).

So for now I think I’ll just try to take multiple shots when provided with a good photo opportunity (going forward and until after the cruise). But once we return, if I’m still having file issues, then I really have no choice but to send the camera away and hope that there’s something that can be done. At the end of the day, it could mean my camera is replaced… but I would be happy to have it simply repaired because I’ve shared some fantastic adventures with the camera and am not ready to call it quits just yet. :)

My camera is an extension of me when I’m using it. I’m protective over it too (almost like it’s a child and I worry when people who are not experienced camera users like myself try to hold it or mess with it). When great photos happen, I’m proud of the work my camera and I do together. And I have no problem bragging about how I feel really in sync with it when a shot turns out even better than I anticipated.

I thoroughly enjoyed using my previous camera, the Kodak C360 (a simple 5 Meg point-and-shoot that’s nicknamed “3-60”), and I still enjoy using it now and then for outdoor shots and of course for video. It too has served me well and I’ll only trash it once it finally dies.
I still remember lining up outside Future Shop in St. John’s for the annual Boxing Day Sale in 2005. It was a cold, cold morning where I crawled out of bed around 5:30 a.m., drove across the city, and then waited in line until the store opened at 7:00 a.m.. It was a completely new experience for me and I did it on my own and with stubborn determination (because really, whose body voluntarily gets up at 5:30 a.m. without out SOME protest). I know, I know, the whole “adventure” doesn’t seem like that big a deal. But at the time it was for me and I was very proud of my success. I remember calling my parents while outside in the line up. They weren’t overly responsive and mostly mumbled “yes, that’s nice”, but I was wired and too enthusiastic to care.

Last year (as in Boxing Day 2007, so perhaps some would classify that as two years ago), Matt and I went to the same Boxing Day Sale in St. John’s with my parents. There were a few things on the list, but mainly my parents wanted a new laptop and also some kitchen appliances. So we each had an “assignment” and split up once the doors opened. We then met in the appliance department as it took longer to process that order (it made more sense for Matt to scout out the laptop and I hunted for headphones my aunt was hoping we could get for my uncle). It was a lot of fun and despite the early rise, we were full of energy. Once the purchases were taken care of, we then went on to celebrate at Tim Horton’s by devouring some breakfast sandwiches and hot coffee.

It’s interesting to see how this blog post progressed… I started telling you about my beloved camera that is seems to be ill, and I’ve managed to meander into a member from back home. It’s normal for everyday routine-like actions to somehow trigger a memory or spark a reminder of my family or St. John’s and Newfoundland in general.

As the song Saltwater Joys says, “Some go to where the buildings reach to meet the clouds Where warm and gentle people turn to swarmin‘, faceless crowds.” That’s how I feel (sadly) about Toronto on a semi-regular basis. But there are those rare occasions when you encounter someone who feels the same way as I do and is happy to exchange a smile or a passing friendly glance. It really helps this city feel less cold.