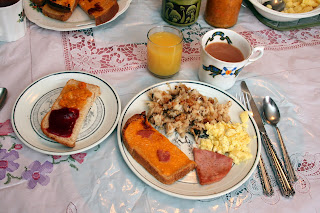 My husband and I arrived in St. John’s on Thursday morning at 4:00 a.m. Our flight was technically suppose to arrive at 12:00 a.m… but ironically, there was a lot of fog in Toronto and very few flights were getting out. Luckily though, we endured just a delay and our flight wasn’t cancelled.

We planned this trip months ago with the purpose of me organizing a bridal shower for my friend Darleen. She and her fiancé, Mark, are getting married this June. I’m their Matron of Honour and I want to help them prepare for their special day as much as I can despite living away from St. John’s.

Tomorrow is Family Day in Ontario, and I’m happy to be in St. John’s spending the day with my family here in St. John’s. My parents are having a number of people from my mother’s side of the family over to have a belated birthday celebration and to also celebrate my grandfather’s birthday which is on Wednesday. Poppy will be 82 and we’re really glad to be here to celebrate. We unfortunately missed the big party that was held for his 80th, but we were lucky to be in St. John’s last July for Nanny’s 80th.

The photo in this post was taken on Saturday while at my grandparents’ for brunch. It’s a real Newfoundland breakfast with Fish ‘n Brewis, scrambled eggs, fried up ham, cheese and bacon toast and of course a piece of bread with some Newfoundland jam (marsh berry and bakeapple were the two types I had).

Whenever we come home for a visit, I really try to make sure I spend time with my grandparents, and great aunts. Not to sound terribly morbid, but none of them are getting any younger and someday I’ll wish I had taken the time to see them more. But I also know that the opportunities I have now are appreciated so much more because I’m aware of how lucky I am.

What would a visit to St. John’s be without “getting some weather”? When our plane touched down, the weather couldn’t have been better (again, it was so ironic that fog in Toronto was stopping our flight from taking off!!). We’ve had snow a few times since that time, but it’s just a normal thing this time of year. Even today prior to the shower, there was a lot of snow blowing, the roads became very slippery… but it didn’t stop people from going out and tending to business as usual. In fact, we had a really good turn out this afternoon. I think approximately 38 people were invited and we had at least 28 in attendance.

I’m sure I’ll have more to say about this trip home and lots of photos for Facebook and Flickr.