If you didn’t hear, there was an really brilliant contest held on Facebook for 48 hours involving Newfoundland and Labrador Tourism and WestJet. 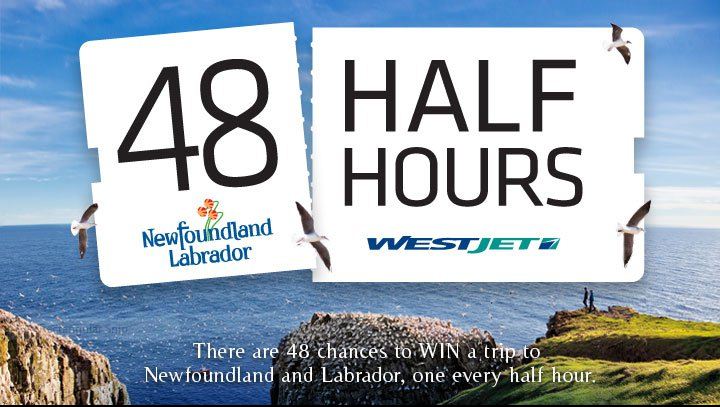 It was wonderful to see the enthusiasm both on the NL Tourism Facebook page as well as the excited posts I saw in my news feed of friends and family both local and abroad vying to win. END_OF_DOCUMENT_TOKEN_TO_BE_REPLACED

Are you familiar with someecards? If not, make sure you have some free time before you visit their site. If you’re easily offended or lack a sense of humour, I recommend not clicking the link and finding something more appropriate to do like watching paint dry.

Every week I received a round up email from someecards and I’ll admit, I don’t always click on the message and it’s lost in the abyss that is my inbox.

But this morning, I opened that email and this is was one of the ecards featured and I can’t even tell you how much I laughed early this morning. END_OF_DOCUMENT_TOKEN_TO_BE_REPLACED

On Friday I arrived in Toronto for the 2011 Canadian Conference on Medical Education. This is my first time at the annual conference and it should be an interesting experience.

Attendance usually consists of faculty, staff and students from medical schools across the country. There are various tracks and I’m attending the Resource Group on Institutional Advancement. Tomorrow I’m presenting a session titled Social Media and the New Normal: finding our way while protecting brand and reputation.

More on that and the conference in general tomorrow. I have an opinion. The right one.

Since moving back home, I’ve been paying more attention to comments that are posted on websites for media outlets. When an article is posted and a hot topic is the focus, you’ll often see a lot of comments and some of the conversation amongst posters can get very heated. It’s rare to see an all our flame war, but I find us Newfoundlanders tend to be rather passionate about our beliefs and point of views. 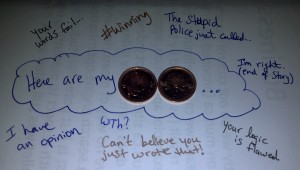 Even after reading comments that I feel are misguided or contrary to my own views, I continue to believe that it is important for the public to have a place in the virtual world where individuals can share information and thoughts.

But what if you come across someone who has an opinion that you strongly disagree with? What if you find their words offensive? Can you just walk away? Do you jump in and provide what you feel is the civilized view of the masses?

Here’s a general non-offensive* example:
What if you hate the Blue Jays. I don’t mean dislike or find annoying, I mean you hate them so much it makes your blood boil. You want to rant publicly about a pitcher and the embarrassment the team is causing to you as an fan. Please note that I’m completely indifferent about baseball and I’m just picking this at random. I honestly know squat about the Jays and pretty much ziltch about a previous pitcher; whatever his name is – Doc-whatever, Roy-what’s-his-name, doesn’t matter…  I heard he was a great guy and there was a lot of respect when he left the Jays last year.
So what do you do? Do you go on all the sports forums and insult the pitcher, the team and their mothers? Will you stalk any media coverage about the team and pipe in with your angry words and rant until your fingers ache? Will you have a battle royale with anyone who argues your logic?

Back to my point – what if you publicly throw around your opinion and others find you offensive. Does this reflect your company or organization? I suppose an important question to ask is: have you identified yourself and are you known as a potential spokesperson for your company, business or organization? Or should you always be seen a Joe/Jane Public and not an extension of where you spend your Mon-Fri, 9-5? This is where things get complicated. Many will state that it’s a free world and we have a right to express our views.

But as social media expands, our world gets smaller. Gone are the days when you could send in an angry rant to your local paper and a few avid readers may see your prose, but for the most part you could go unscathed because it was unlikely that your boss  would see this rant and personal dig at your employer.

As a PR professional, it’s not fun to hear when you catch wind of a coworker or someone connected to your organization who’s publicly upset about something and they feel their voice wasn’t being heard, so they had to “go public” and you see their face across all forms of media. That’s rough when you’re someone who tries to promote internal communications and one of your personal professional goals is to break down barriers and help encourage camaraderie.
Silencing the naysayers isn’t the solution, but encouraging open communication and actively acting on feedback is important. Otherwise, you end up having Joe/Jane Public creating an anonymous profile on a website so that they can bitch and moan about their situation and feel like they’re getting “one up on ‘the man‘”. It’s such an old-skool way of thinking… 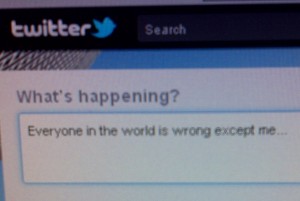 I often hesitate to weigh in on the more controversial issues as I want to avoid confusion between who I am and where I work/volunteer/etc. The flip side of this is that there are some people who are never really seen as a just a regular person with an opinion. Politicians and higher level executives are more scrutinized by the public eye and keeping up appearances is pretty much in their job description. Yet how often have you read someone defending an opinion you oppose and you’ve thought, “yeah well they probably just work for Company X… It’s just their PR team at work… What a bunch of hacks…”

If someone is proud of their employer or organization, can’t they defend their opinion too? Maybe one day the whole world will hate dolphins except for a few people who are part of We Love Dolphins Inc. While the mass populous feels that dolphins are smug egotistical mammals that deserve no love, is it wrong for the employees of a pro-dolphin company to go out into the world crying out their opinion? Maybe I honestly love dolphins and my dream job is to work for a company that also shares my passion. Perhaps when I’m not at work, I’m online reading articles that are anti-dolphin and it upsets me so much I can’t help but tell you how I feel. Would you belittle my arguments because clearly I can’t be genuine since I work for We Love Dolphins Inc. I’m bias of course… right????

I don’t really have a perfect answer. Nor do I claim to have thoroughly dissected this issue. It’s not wrong to relate with people on a personal level and share your true feelings, but where exactly do you draw the line? What one person may view as being something that’s OK to post online, someone else may cry foul.

I’ll often ask myself, “does this matter?” or “will anyone care about this tweet/post/status update?” but even then… am I right or just being narcissistic and assuming people care? By asking this very question, I’m probably fishing for comments…

How do you decide where to draw the line? When do you just walk away and let someone else have the last word?

*I claim my Blue Jays example is non-offensive because most baseball fans have a sense of humour. Unlike Leafs fans who probably would have thrown a hissy fit if they thought someone didn’t have a die-hard love for their team.
P.S. I <3 Ottawa and Boston… #HockeyFanGirl

Is Your Cow Purple?

I’m finally finding time to read Seth Godin’s Purple Cow. I’m about a third of the way through and really enjoying it.

Hoping it can inspire me to think of new ways of marketing and communicating the exciting things happening in our faculty. 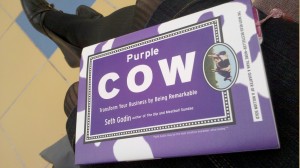 That’s all for now until I read more. So what are YOUreading right now? Anything on your bookshelf or on a wish list you’ve been meaning to get started on?